If you've been following this blog, you'll remember Stephen Lobolia, a missionary to the Toposa people of South Sudan. I asked him to let us know a bit about his mission there and I wanted to share that with you.

My name is Stephen Lobolia, from Turkana, Kenya. I was brought up in an unbeliever’s family, my father being a pastoralist and a witchdoctor. Early 1980s I am told there was severe drought all over Turkana. My mother was the first wife among many others. My father sent her to go and benefit from relief food which was distributed from Lodwar by NGOs. I was young by then. My mother decided to take me with her. So that is how we came to live in Lodwar and access education.

My other brothers decided to leave pastoralism and accompanied us in Lodwar. One of my elder brother left school due to negative peer pressure. He began to indulge in drugs. Staying away from our father my elder brother took the responsibility to be the bread winner. His business was selling drugs. Now here I was made to be involved in the business. I was trained to be the transporter of the drugs. I was assured that you are young and the police won’t suspect you. I thank God because I was almost caught ones but escaped.

My salvation story. I ever hate to have access to gospel witnesses. I kept escaping every moment I saw them coming to me. One day, noon time, the sun was really hot and i laid in the house, I heard someone knocking the door. It was Pastor John who was led by my friend to me. That was the day I gave Jesus my life after knowing I was lost heading to hell.

This was the start of a burden to reach members of our family. After I finished secondary education 2002, I talked to our church to send me to Kalokol, 55 kms away from home to start a church. This was the place we used to do our illegal business and my brothers lived here. My brother and his family got saved. We started fellowship in his home. They were among the 8 first converts we baptized and the Baptist church started 8th of Feb 2004. I served this church until May 2013 when I resigned for South Sudan Missions. By now three churches exist and two bible study areas around Kalokol area near Lake Turkana.

2009, was my first short term mission trip to South Sudan. It was among the Toposa people group. The first impression was when I was sharing with a group of Toposa women. In the middle of the conversation one of them stopped me. She said,” we are hungry buy for us alcohol.” After we finished conversation and left the imagination did not leave my mind and my heart. To me this was a spiritual need. 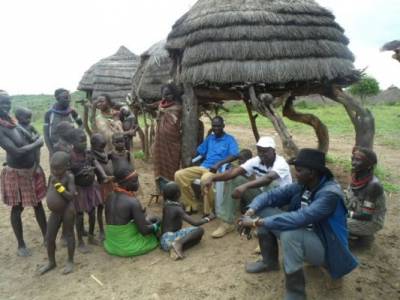 Since then, God put Toposa burden in my heart. As I was pastoring the Kalokol Baptist Church, I was just longing for ministry in South Sudan.

For several years I began planning short term mission trips reaching the least reached Toposa people. I have loved Apostle Paul’s perspective on the verse below,

Romans 15:20 “And so I have made it my aim to preach the Gospel, not where Christ was named, lest I should build on another man’s foundation. Continue praying for Bruno and Mumaina.

May 2013 I resigned pastoring and pursued my call for the missions work. I got a sending Church in western part of Kenya. The commissioning service was done Oct 2014. The challenging part is raising funds for this work. It has been going and coming back to Kenya since.

These are agro-pastoralist people. Majority are illiterate that depend on livestock for their livelihood. Also most of the Toposa are polygamist. Many practice witchcraft. People tie sticks around their waists and wear animal skins for protection. In absence of rain they sacrifice animals to their diviners for rain.

Because of cows, Toposa and our Turkana people practice cattle rustling. Many among these communities have lost their beloved ones. My first mission trips were full of fear due to the two tribes hostility and hatred. God made them to see me as a friend not an enemy.

I have started two Bible study groups among Narijon and Nyangia.

Most of the worship is preferred done at night. The reason being at day time the people take care of their livestock for grazing and taking to water.

Other disciples to pray for are Elijah Lobeyo, Aurelio the government administrator and the chief Peter Locham.

I am married to Patricia Lobolia. God has blessed us with three children. Our first borne is a girl named Grace 8 years, followed by Joshua 6 years and Ashley 6 month. 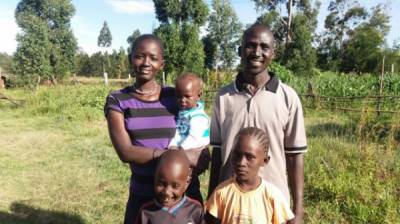 We plan to stay in Nyangia. We pray for providence of land and resources to construct house to stay with my family.

Also we pray for means of transport.

Our support has not been consistent. We pray that the Churches will obey the Great Commission to support global Evangelization.

Yours in the great Commission